It was a blessing to sit next to a great soul for almost 45 minutes. He is the kind of person that the world will remember as a saint, one who served and brought peace upon millions of people. I’m talking about Dada JP Vaswani. He is entering his 100th year on this planet. He is a ‘living saint'.
My father has a built a beautiful farmhouse in Mulshi. The family loves to go there especially just before the onset of the rains. The air smells of the possibility of the downpour of monsoons. That's also when the fireflies are in the peak of their illuminated glory. There is a section of the forest that completely lights up like a galaxy of stars. Entire trees shine as though they are lanterns. They glimmer on and off in perfect synchrony. It’s a sight that will surely make you believe in magic.
Usually just after dinner, we step out for a walk into the forest roads. Around 9 pm is when the fireflies start to get ‘lit'. At first, you will see just one solitary firefly light up. On and off, on and off, it begins to fly around in order to attract some attention. You wonder, "what’s so magical about this?" But wait, what’s that? Was that another half a dozen of them that just lit up? And then a few more. And then 1000’s more. There goes the entire tree. And before you know it, the entire forest is shimmering!
But, it began with that one. Oh! Where has it gone? It’s merged into the forest of luminescence!
So, what is my definition of a ‘saint'? A saint is that firefly. Looking at their glow, many more will discover that they too have a glow within them!
Sitting next to him, I asked, ‘Dada, who is God, what is God?’ He looked me straight in the eye, and without a moment’s hesitation, he replied, ‘YOU are God. You just haven’t realised it yet!’
That’s my firefly!
Let’s be in the company of great souls. You and I can’t see it yet, but they can. They can see the glow inside us. In their company, our glow begins to reveal itself too. And then, some more will glow. And some more. And then soon… 😃 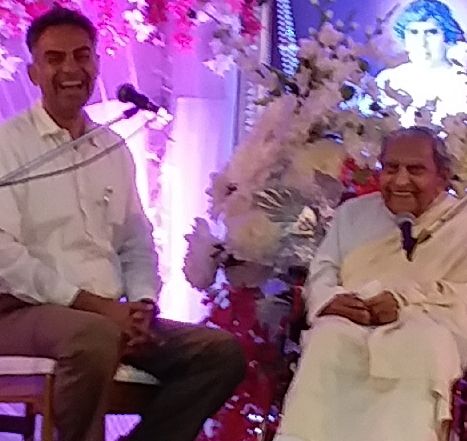