A few months ago, in a workshop with about 60 dynamic college going youth, we asked them a question - ‘What is the most painful problem youth are facing today?’. Each group of six people had to discuss and identify their issue. They had to frame it in 5 words or less, and we wrote all the problems on a whiteboard. We asked the entire class to vote in order to find out the most prevalent issue. Guess what turned up with 90% votes - “How should I handle boredom?"
Boredom is a fate worse than the most rotten parts of hell. I experienced it really intensely for the first time during my first ever ‘proper' internship. I was in the third year of mechanical engineering studies. Our's was a specially created ‘sandwich’ course. During the third year, we had a 6 month long apprenticeship program. I was appointed at a company that manufactures specialised CNC gear hobbing machines. Very interesting stuff it was, for the first three days.
After that, I swear there were moments when I could fall off to sleep standing on the shop floor, inspite of being surrounded by the high decibel sounds of machine clanking all around me. The issue was not that I was not interested. I was super interested. More than anyone else. I wanted to know all about those machines and how to operate them. The issue was that I did not have any task given to me. Nothing. I just had to hang around for 8 hours and ‘observe’. The thought of observing this way for 6 months was worse than the fear of death by drowning in boiling chocolate sauce.
It got worse before I decided to something about it. But the day came when I decided to take charge of my own fate. I identified one particular milling machine, the operator of which was a friendly fellow. Every time the steel filings would accumulate, I offered to clean up the machine table. It was menial work. But, I did it with great enthusiasm. I cleaned his machine really well. He was amazed. Soon, the inevitable happened. He offered to teach me to operate the machine. That was it, I grabbed the opportunity, and I was in business!
Over the next few weeks, I took more and more initiative and soon gained the confidence of the supervisors on that section of the tool room. They began to trust me with the machine, under supervision. By the end of four months, I became the only graduate trainee engineer, to be asked to travel to Chennai along with a team to install the machine at an actual customer site.
‘Do'.
Thats my answer to boredom. Sorry if it sounds a bit boring! But, thats the plain truth.
That's how I have learnt most of the genuinely useful things I know in my life today. By being interested, asking many questions, and offering to help. Just plain simple ‘doing’. Things begin to roll own their own after that. I learnt coding this way. I learnt painting this way. I learnt cooking this way. I learnt how to connect with people half my age this way. I learnt to write this way. I even learnt to be a trainer this way! And, honestly, these are just about the only truly useful things I know how to do! 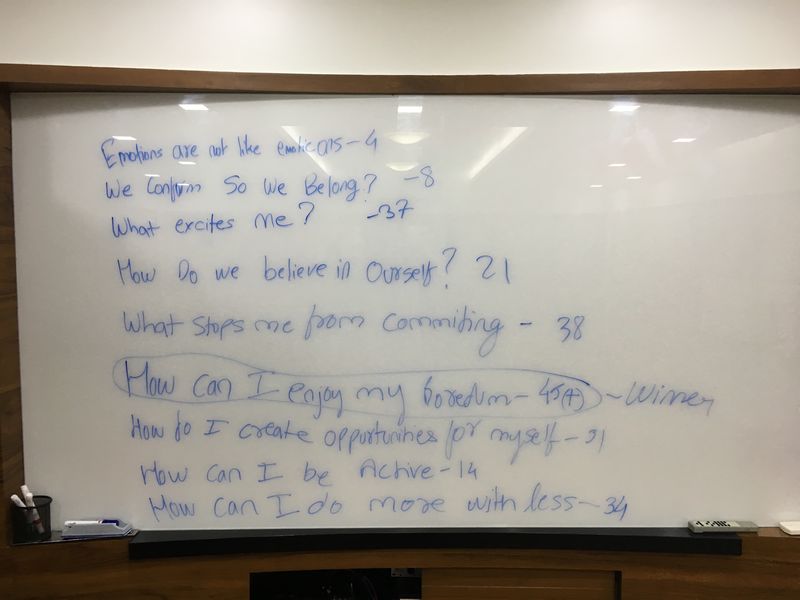