Kids love chocolate. And so does my 4yr old son, Dhyann. Today I attempted a micro-recreation of a famous experiment that was first carried out at Stanford in 1970 by psychologist Walter Mischel. It was called ‘The Marshmallow experiment'.
I told Dhyann that I am going to give him half a piece of chocolate in a bowl. Then I explained to him that I am going to set a 10 minute timer on my mobile phone. I gently told him that if he does NOT eat the first half of the chocolate until the timer bell rings, he will also get the second half as a bonus!
With some scepticism I placed the chocolate in front of him and started the alarm. It was a revelation to me that my 4 year old can actually understand and read a digital timer! In the first 2 minutes, he asked me the same question about 5 times ‘Are 10 minutes over yet, Papa?". Then I saw him staring at the screen of the phone and he went… “when this circle becomes red, can I eat the chocolate?" His mind was going all over the place. His lips were pouted as if to seal the opening of his mouth and prevent the chocolate from accidentally flying in!
Then something interesting happened. He shifted focus to his caterpillar-tracks digger and forget about the chocolate for some time! Every now and then his eyes would shift to the phone to make sure that the screen saver had made the screen go off.
In the original experiment at Stanford, there were 600 children involved, and the researchers tracked the progress of the kids in their lives for almost 40 years. The results showed time and again that the kids who were able to hold off eating the first candy for 15 minutes were described by their parents as significantly more competent. Not just that, their SAT results were higher, they showed lower levels of substance abuse, lower likelihood of obesity, better social skills reported by their parents!
My ability to hold off immediate pleasure and gratification, for a greater FUTURE goal, seems to be one of the most critical requirements for success, and happiness too.
Can I hold off checking my SMS / whatsapp / TV messages until I get my next 3 tick marks on my to-do lists? I will be more productive!
Can I stop myself from talking and just focus on listening to understand to the other person? I will be a better salesman, parent and husband :-)
Can I hold off my immediate reaction of anger and irritation when I feel I am being unfairly treated? I will have much better relationships in my life!
Can I hold off the temptation to end my workout early and put in a few more minutes of high intensity reps? I will have much better fitness!
So far so good.
Now, the question that comes to my mind is this - can I LEARN to improve my ability to delay gratification?
The answer to this comes from a recent experiment conducted at the University of Rochester in 2012. The researchers split the children into two groups.
1. The first group was subjected to a series of unreliable experiences. They were promised some things, but the promises were not met.
2. The second group was given some very reliable experiences. They were promised some rewards, and the rewards were delivered on time.
Can you guess what happened?
Thats right! The second group scored much better at the marshmallow test!
This means that 'delayed gratification' can be learned.
I truly believe that the greatest gift I can give my child is gently to help him to develop the ability to delay the urge to satisfy immediate pleasures. Here are a few of the strategies we have attempted:
1. When he wants a toy or a gift, from time to time, my wife and I promise him that we will get it for him, but after 10 days. Then we make a chart and teach him to wait until the days to pass. When the pre-decided number of days pass, we do get it and have a celebration.
2. We don’t give in to his demands when he cribs and throws tantrums, but we wait for him to settle down. Now he knows that he can win our attention much more through a smiling and happy face, rather than rantings and ravings.
3. From now on, we will often play the 'marshmallow challenge game’ with him, and help him to win!
Coming back to Dhyann and my experiment, when the 10 minute alarm finally went off, he jumped with excitement and came running to me. I immediately handed over the second half of the chocolate to him! He seemed thrilled. I believe he must have felt like a winner. I certainly did :-)
I have started experimenting with delayed gratification on myself… holding off opening that flipkart parcel I gifted myself until I have completed all my tasks for day… listening patiently to people without the temptation to start forming my answer as the speak (hahaha… this one is really tough… I’m practising with my wife Aarti to start with :-)
Loads of Love
adi.
‘The Marshmallow Experiment’ is an experiment carried out at Stanford University in 1970. It has given us one of the most profound insights into what factors create human success and happiness, in the field of psychology. It gave us the term ‘delayed gratification’. Read our blog post about my attempt to re-create this experiment with my 4 yr old son here..
http://bit.ly/dancinwidtigers
Do share your thoughts with us 😃 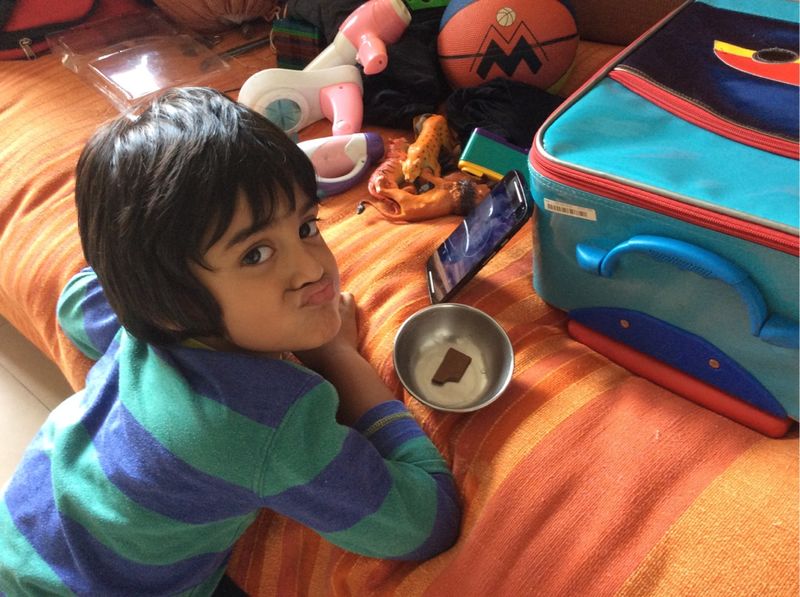